For 14-year-old Alex Kellar, the war can’t be over soon enough. His beloved older brother Oliver is with the 101st Airborne, right in the heart of Nazi Germany’s last-ditch battle for survival.

That battle is about to come closer to home, beginning with Alex and his friend Larry discovering a drowned man washed up on the beach. When the body is identified as a German spy, the boys bask for a brief time in the spotlight. It’s an exhilarating moment.

Except once the spotlight is gone, Alex discovers that spy was not alone, and the lives of two elderly women his brother made him promise to look after—not to mention Alex’s parents and older sister—are in great danger. Dare he tell the authorities the secret? If he doe 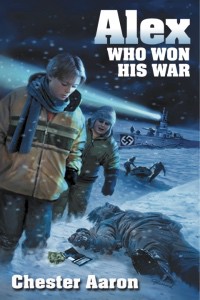 sn’t, will it betray all Oliver is fighting to protect?

From award-winning author Chester Aaron comes a story that makes history come alive, a worthy companion to his story of another teen’s struggle to survive in the horrors of the Warsaw Ghetto, Gideon.

As with all Zumaya Thresholds books, Alex, Who Won His War is available in all popular ebook formats and in trade paperback wherever good books are sold.