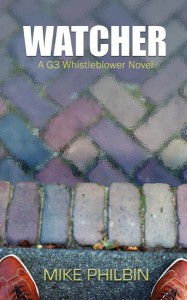 The follow-up to last year’s Tandem (G3-whistleblower #1) novel, Watcher further expands on the surrealistic confessions of a covert-operations super-soldier.

Super Soldier: someone who can dream harder than you.

Covert Operative: your mum, your dad, your sister, your brother, your son, your daughter.

War World: the place where you live right now, at war for PROFIT.

Dream Space: ah, come on, you know what I’m going to say, “Your dreams are not what you think they are.”

So, where are we going with this press release for Mike Philbin’s latest fictional novel?

In Tandem, released in 2013, Lorien Howell, an estate manager at Oxford law firm Convo & Convo, is seduced by her G3 whistleblowing client ‘Actor Arrenay’ to join him in liberating mankind from The Global Gambling Game or War World. Of course, she doesn’t believe him, in fact she despises his lunatic ramblings, until the evidence starts to mount in his favour and she finally sees what kind of a sick and manipulative (and wasted) world she inhabits.

In Watcher, released in 2014, having lived on the streets of the city for seven years, ex G3-agent Vagrant Millgate starts to receive messages from a cube inside his head. He had lost his job. He had lost his daughter. He had lost his wife. Suddenly, he has a new mission, his life has new meaning. But how will he be able to cope when the G3-world of psychic-attack dogs and transforming super-soldiers has changed so much in his absence?

Vagrant Millgate finally chases down his first target by listening to the Shirley Bassey song, “I who have nothing,” that’s been playing in this person’s head all morning. His mission is to save this guy from a fate worse than death. Very soon, it all starts to go wrong and Vagrant Millgate finds himself in a struggle for power that may encapsulate the whole of modern human experience.

“One down, seven to go,” says his new friend and ally Lady Grey but where will her charitable patronage take our hero? And what is his role in a world rampant with these surrealistic and seemingly unbeatable foes?

Still none the wiser? Wait until next year when Kumiko (G3-whistleblower #3) takes the reader on a manic and frantic journey across the universe.

Philbin’s a radical, he professes to ‘detest the mainstream’ and ‘cannot understand how such emotionless Franchise Writing can satisfy the creative needs of the writer, OR the reader’.