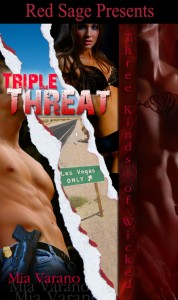 Where in time is Trey this month?

Present day, in the desert outside of Las Vegas. They say what happens in Vegas, stays in Vegas, but what happens when part of Vegas tries to escape? Brandy knows too much. She has seen too much. She can stay in the city and try to brazen her way through it when the mob comes after her. Or she can run, and take her chances on the road. It’s better than being a sitting target.

She runs. But it’s not only the mobsters who come after her. It’s also the law. FBI Ridge Coltrane has had his eye on Brandy, and for more than one reason. She might be a key witness, but she’s also hot. Very hot. Too bad he has to keep his hands off her.

And chasing after Brandy, right behind the criminals and the lawman, is a mysterious stranger on a motorcycle. Neither goon nor cop, both man and angel, Trey isn’t playing by their rules. He’s got an agenda all his own. One that involves breaking down their pleasure barriers and teaching them that love has no boundaries….

“Triple Threat” by Mia Varano
On Sale Now at www.eRedSage.com!