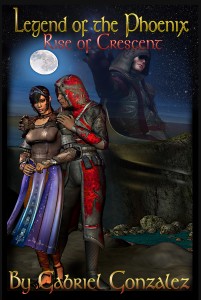 Title: Legend of the Phoenix: Rise of Crescent

Available in Paperback, Kindle and Nook

In a world of grand cities, magnificent castles, and powerful Races lies a legend that the world has long forgotten. A legend that through time, has faded. The story of the once all powerful Phoenix Clan and their battles against the menacing Beasts, is now a mythical story, often told to children as a bedtime story. The young children of the world of Pardes can be seen playing in the streets of their towns pretending to be the Phoenix Clan fighting the evil Beasts. The legend of the Phoenix has been long forgotten. Young, adventurous, and a bit careless, Shadow Guidan is one of Tarver’s finest young messengers. He is the son of the King’s favorite General, Magus Guidan. When Shadow is asked to take upon a new duty involving the protection of Princess Emerald, he realizes that this may be his chance to leave behind the boring job as a messenger, and take a part in something important in the Kingdom. Excited and nervous, he welcomes his new duty with great joy. After meeting Princess Emerald and her two Luna trainers, Sage and Katrina, Shadow realizes that a life of excitement is much more than he bargained for. The Aakesh Race is after him for a reason he cannot seem to find out, his father has disappeared, and he can’t seem to get rid of the same reoccurring nightmare that possibly leads to his death. To make matters worse, each day he spends with Emerald he finds himself falling for her. Their journey together will lead them to uncover the lies and deceit hidden behind the Kingdom of Gaia. An ancient evil power is set to be released, and the only way to stop it, is to uncover a secret that has been hidden from the world for over a thousand years.

Legend of the Phoenix on Amazon

No Frills Buffalo/Amelia Press, A Publisher Like No Other