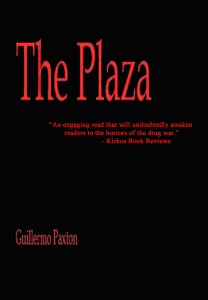 Also available for Kindle and Nook

Praise for THE PLAZA

“It is an unforgettable novel that you won’t put down.” -R. Hastings

“THE PLAZA is a brilliant piece of work.” -Chris Mendius

“Images that will stay with you long after the page is turned.” -Amazon.com

“An engaging read that will undoubtedly awaken readers to the horrors of the drug war.” -Kirkus Book Reviews

Saul Saavedra is a crime reporter for the Juarez Daily newspaper. In just a year’s time he saw his city change from decent place to live and work to a crime-infested inferno. He reports the happenings in a city that is experiencing total social decay and writes against the government that at best does nothing about it. Two major drug cartels battle it out in Juarez and Saul soon finds himself in the crossfire between La Linea and the Sinaloa Cartel.

Guns for hire are a dime a dozen in a war among cartels, but Felipe stands out as one of the best. His only love is for money, or so he believes, until he meets a beautiful young prostitute named Ruby. As he rises in the ranks of La Linea his relationship with Ruby changes as well, and soon he learns that she too has a taste for blood.

The Plaza on Amazon

No Frills Buffalo/Amelia Press, A Publisher Like No Other.  Visit nofrillsbuffalo.com For More Information