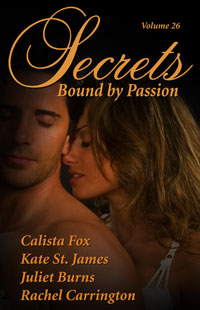 Former lovers Risa Haber and Eric Lange are partners in a catering business, but Eric can’t seem to remain a silent partner. Risa offers one night of carnal delights if he’ll sell her his share then disappear forever. Eric figures he has to play along—or does he?

Over the next three hours, Eric worked his ass off delivering desserts and flirting with women older than his mother. He hadn’t intended to become the party boy-toy for the post-menopausal set, however, as the booze flowed, Lainey’s “film career” friends developed into his personal entourage, introducing him to their friends, who introduced him to theirs. He quickly discovered that the more time he spent charming the women, the easier it became to pimp Risa’s catering division…which led to increased exposure for the bakery. While he never did get a chance to scope out the Hollywood attendees, by the time his break arrived, he’d garnered several promises from wealthy locals to drop into Sweet Sensations and sample Risa’s daily fare.

While on break, he dug his cell phone out of his locker and called his assistant manager at Bella Fortuna for a re-cap of the night’s business. As he secured the locker again, he glimpsed Risa whirling around and practically running from the tiny room.

High-tailing it, she glanced back. “I forgot to do something.”

No kidding. Like, say, pay him one scrap of attention since their conversation with Kyla.

He bolted down the hall after her, in the opposite direction of the party room. She hurried around a corner.

“Where are you going?”

He laughed. “You don’t smoke.”

“Maybe I should start.”

Taking the corner, he nearly collided with a wall of huge, leafy plants. “Risa?”

The leaves of the two largest plants rustled. Frowning, he parted their tangled branches to reveal a deep—and very private—alcove. “It’s like a jungle in here. What is this?”

Risa’s back was to him as she used one of the keys dangling from her retractable wrist band to lock a small cabinet sunk into the black-painted wall to his left. Leopard-print hangings of various sizes draped all three walls. A zebra-striped bench flanked the rear wall, and water trickled over rocks in a small fountain atop a vine-shaped pedestal to his right. The same music playing in the party room drifted from concealed speakers, the female singer sounding orgasmic as she oohed and told her “baby” how much she loved to love him.

“Lainey told me about it.” Facing him, Risa popped a hard candy she must have retrieved from the cabinet into her mouth. She set the wrapping on a built-in wall shelf, also painted black. The candy’s berry flavor scented the air. “She said I could use it as my private break room.”

Stepping between the plants, Eric entered the hideaway. The leaves of the tropical plants rustled, once more forming a wall behind him.

Risa smoothed her uniform skirt. “What are you doing?”

“Pretending I’m taking up smoking. What are you doing?”

Her gaze skipped away. “Avoiding you.”

“Why? Risa, all I’ve done tonight is try and help you.”

Eric glanced down. “Well, it’s not like I looked like an ape-man before, but, yeah, I’m not sure how I feel about the shaving, either.”

She pushed back her hair from her temples in a gesture of frustration, unintentionally creating the slightly messy, just-been-loved look he adored. “I didn’t say I didn’t like it.”

She blew out a breath. “Maybe I like it too much.”

He smiled. “Rees, if I’d known that, I would have shaved it while we were dating.”

“No, I like the natural look, too. But this is different. Novel.” Her hand lifted toward him. However, unlike when Viv Va-Voom had nearly stabbed his stomach with her dagger-like fingernails, he didn’t mind. At all.

As if suddenly realizing what she’d done, Risa pulled back her hand.

Stepping closer, Eric clasped her hand and placed it, palm flat, against his bare chest. Her pinky finger grazed his right nipple, and it puckered.

The rhythm of her breathing tightened. She gazed at his chest, mouth parting. “It feels smooth, but not effeminate, like how some of the guys at your gym look.”

“That’s right, we used to work out together there sometimes. I miss that.” He raised her hand to his mouth and placed a tender kiss on her fingertips. “I miss you.” His chest literally ached with the love he felt for this woman. Two days ago, on the phone, when her passionate declaration of climax had reached his ears, he’d told her. Idiot.

Had she heard him? Believed him? Had he scared her off?

Her gaze met his. “Eric, I’ve been thinking…” Her voice shook.

“So have I. Thinking, dreaming, fantasizing about being inside you again.” This time, he wouldn’t screw up.

Her fingers twitched against his lips. While the singer’s voice oohed over the speakers, he slid Risa’s hand to his bare shoulder, murmuring, “Listen. She’s enjoying herself.”

“Nice to know. But I was thinking more along the lines of how you sounded on the phone the other day, way sexier than Miss Summer. And now, your maid uniform. I imagined how hot you’d look wearing it, and I’m definitely not disappointed. You look amazing, Rees. You are amazing.” He curved his hands around her waist, half-whispering, “Did you wear them?”

“I need to get back,” she replied with an utter lack of conviction.

He unlatched her tiny cell phone clipped to her waist and transferred the gadget to the wall shelf. “Our breaks just started.”

“I’m, um, not really scheduled for a break right now,” she admitted in a soft voice.

“Well, you should be. You deserve one.” As he brushed a kiss across her mouth, he tasted the rich, ripe flavor of spring berries. His throat tightened. “Did you?” he repeated, voice hoarse.

“You want me to check, don’t you? Naughty girl.” Whipping her around so her gorgeous ass faced him, he slipped one hand beneath her altered skirt. “Oh, baby, you did.”