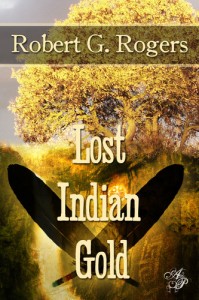 Blurb: Spud, an eleven year old, gets hopelessly lost in the swamp, but makes himself a camp and sets out to survive. While he’s surviving, he has a confrontation with a hungry alligator and some close shaves with two bullies, even takes a swim in an underground river. But, his luck isn’t all bad. He makes friends with two girls his age, Laura and Suzy. Not only that, he overhears the bullies talk about gold buried someplace in the swamp, maybe on a sacred island. That gold would mean a new farm for his Mama and Papa. They had just been evicted.

The girls and Spud team up with an Indian man and his son, Cricket, to find the gold. Spud finds the “sacred island,” but no gold. Just some old leather skins marked with strange symbols. Then, thanks to the two bullies, he ends up in a traveling circus as a “wild boy.” And, something happens that makes him believe he knows exactly where that gold is buried. Laura and Suzy help rescue him and they head into the swamp to find the treasure. Unfortunately, the two bullies are close on their trail.