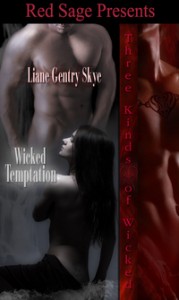 The Launch Title for Our First Ever Author-Led Series…

Beyond the bounds of pleasure, a single chance for redemption…

Trey, a demigod, is sworn to guard the fates of human couples on whose relationships hinge the course of history. Over the eons, his affection for mortals has left him yearning for the one thing he can never have—a heart mate to call his own. When a ruthless goddess resorts to an aphrodisiac to force him to break his vow of chastity, his heart is instead claimed by the mortal woman who is destined to help her human lover save the world. Can a ménage possibly help him undo the damage he’s done?

About “Three Kinds of Wicked”

Trey, a time-striding demigod, spends his life skipping through the human timeline and reuniting couples torn apart by evil forces. Sworn to chastity, sworn to protect those he serves, Trey’s own desires must never be expressed.

But on a mission to the Summer of Love, Trey meets Sage, a free spirit with a broken heart, and Russ, a scarred POW with a broken mind. His mission is to reunite Sage and Russ. But passion claims them, and their love triggers a destruction and chaos unmatched by any evil. By rights, Trey should be executed for breaking his vows.

Watch each month for a new “Three Kinds of Wicked” release, starting in July 2009, from Red Sage Publishing. The first story in the series, “Wicked Temptation,” unleashes the dangerous passion between Trey, Sage, and Russ. Each following stand-alone story explores Trey’s efforts to physically reunite another couple in the preordained human timeline. The series ends with “Wicked Redemption,” the companion to “Wicked Temptation,” which brings Trey, Russ, and Sage together again.