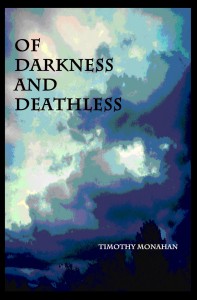 Title: Of Darkness and Deathless

Dr. Samuel Fox never loved his son, 14-year old Preston Scott. At least, that is what Preston believes as he attends his father’s wake in September 1939. The teenager has spent his entire life living in his father’s shadow, desperately seeking the answer to his mother’s mysterious disappearance, but now that his father lies in a coffin, Preston is convinced that his quest for the truth will be buried along with his pain and sorrow… or will it? In an unexpected turn of events, Preston’s search is given new life, and he edges closer to the truth. He uncovers a sinister plan that will turn his entire world upside down. He learns that his mother’s story will change the course of history forever, and that death is never… ever… the end.

Of Darkness and Deathless on Amazon.com